Get ready for a sizzling selection of delectable acts for Hot Summer Night! This year, the line-up is truly incredible, with Ja Rule, Ashanti, Mase & Monica taking to the stage to bring you some sweet nostalgic hiphop and R&B! Hot Summer Night comes to Concord Pavilion on Sunday 3rd September 2017 and it's gonna be dope! 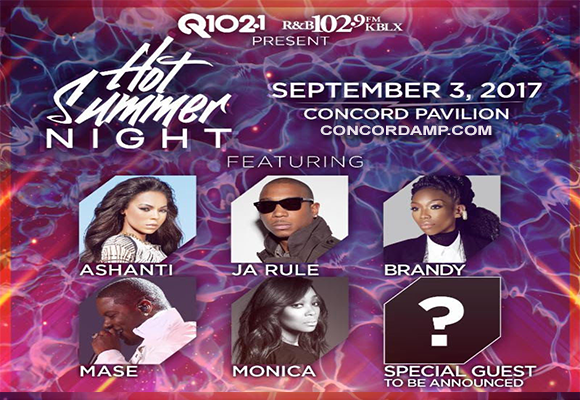 Gravel-voiced rapper Ja Rule made his debut in 1999 with the album Venni Vetti Vecci, which shot straight to No. 3 on the Billboard 200 chart, launching his career. Several hits singles followed, including "Always on Time" featuring Ashanti and "Put It On Me."

Grammy Award-winning singer/songwriter, actor and author Ashanti burst onto the music scene with her 2002 smash hit, self-titled debut album "Ashanti." She was awarded 8 Billboard Awards for the album, and earned a Grammy Award for Best Contemporary R&B Album, as well as two American Music Awards and the Soul Train Aretha Franklin Entertainer of the Year Award.