Alanis Morissette comes Concord Pavilion on Wednesday 29th September 2021 (Rescheduled from Tuesday 3rd August 2021), celebrating 25 years of jagged little pill and the last 25 years of music with special guests Garbage and Liz Phair! Come on down and celebrate this iconic album, winner of the 1996 Top Billboard 200 album, 1996 Grammy Award for Album of the Year and Best Rock Album, 1997 AMA for favorite rock album and the 1998 Grammy Award for Best Long Form Music Video. So, what are you waiting for? Buy your tickets now and come and hear this extraordinary album live! 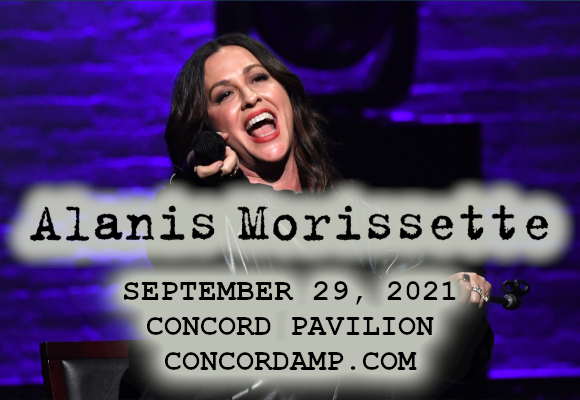 Jagged Little Pill was released in 1995, a more rock-oriented album which sold more than 33 million copies globally and is her most critically acclaimed work. According to manager Welch, every label they approached, apart from Maverick, declined to sign Morissette. Maverick Records released Jagged Little Pill internationally in 1995. The album was expected only to sell enough for Morissette to make a follow-up, but the situation improved quickly when KROQ-FM, an influential Los Angeles modern rock radio station, began playing "You Oughta Know", the album's first single. The song instantly garnered attention for its scathing, explicit lyrics, and a subsequent music video went into heavy rotation on MTV and MuchMusic. After the success of "You Oughta Know", the album's other hits helped send Jagged Little Pill to the top of the charts. "All I Really Want" and "Hand in My Pocket" followed, but the fourth U.S. single, "Ironic", became Morissette's biggest hit. "You Learn" and "Head over Feet", the fifth and sixth singles, respectively, kept Jagged Little Pill in the top 20 on the Billboard 200 albums chart for more than a year. According to the RIAA, Jagged Little Pill sold more than 16 million copies in the U.S.; it sold 33 million worldwide, making it the second biggest-selling album by a female artist.