Looks like someone just turned on the summer heatwave at this time of the year. Not one, but two rock music legends are causing temperatures to rise as they have just announced a summer tour de force. Classic jazz-rock band Chicago and pop-rock artist Rick Springfield will be swinging from one amphitheater to another this summer. Mark your calendars and save this date–Chicago – The Band & Rick Springfield will rock the Concord Pavilion on Friday 11th June 2021. Chicago's jazz-flavored easy-listening rock and Rick Springfield's turbo-charged pop-rock ditties, this double-headliner tour will surely send legions of fans scurrying for tickets. Good news is you don't have to leave your seat. In just a few easy clicks, you'll get that hot ticket in your hands in no time. Start with the 'buy ticket' link on this website and lock-in that ticket now! 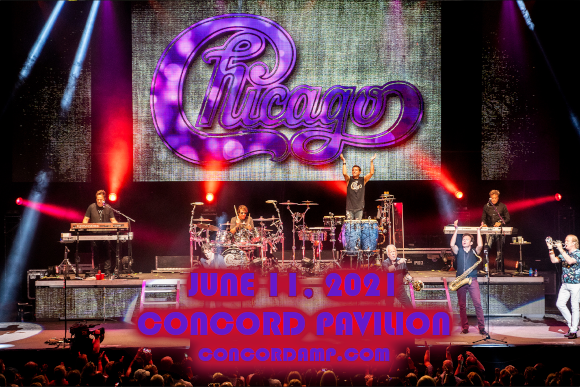 Chicago is a music legend, bar none. Their journey started out as a “rock and roll band with horns” that blended elements of classical music, jazz, R&B, and pop music. By the mid-70s, they gradually transitioned to soft rock-pop rock sound which gave them a steady stream of radio Top 40 hits.

From the sleeper hits like "Does Anybody Really Know What Time It Is?," "Saturday in the Park," "Make Me Smile", "Colour My World" and "Wishing You Were Here"; onto the mammoth chart-toppers like "Hard to Say I'm Sorry/Get Away", "Hard Habit to Break","Will You Still Love Me?", among others, Chicago proved that they had that staying and slaying power. They were listed twice by Billboard on the top 100 artists of all time for Hot 100 singles chart success at numbers 13 and 15 in 2008 and 2015, successively.
Billboard also ranked Chicago at 9th place on the list of 100 greatest artists of all time in terms of Billboard 200 album chart success in October 2015. With more than 100 million records sold under their name –23 golds, 18 platinums, and eight multi-platinum albums, they have had five consecutive number-one albums on the Billboard 200 and 20 top-ten singles on the Billboard Hot 100. Chicago was inducted into the Rock and Roll Hall of Fame in 2016.

On the pop-rock front, a throng of screaming fans were into the mania that was Rick Springfield. This rock and roll heartthrob was also making waves on the TV screen as the beloved Dr. Noah Drake on the daytime drama General Hospital. As his unbroken string of monster hits came along, his music career zoomed-up to unprecedented heights. "Jessie's Girl", "Don't Talk to Strangers", "Affair of the Heart", "Love Somebody"… were just some of Springfields hits that filled the airwaves to no end. In 1981, he scooped up the Grammy Award for Best Male Rock Vocal Performance. He followed with four more top 10 U.S. hits, "I've Done Everything for You", "Don't Talk to Strangers", "Affair of the Heart" and "Love Somebody".

Seriously, this is one rock show you just can't shake off your head. This you gotta see! Book your tickets now.