Two hugely prolific, highly entertaining bands, Chicago – The Band & The Doobie Brothers, are coming to Concord Pavilion on Wednesday 7th June 2017 as part of a mammoth joint-headlining tour! These multi-platinum-selling classic rock bands have achieved legendary status with their incredible careers and solid gold hits – don't miss your chance to see them live!!! 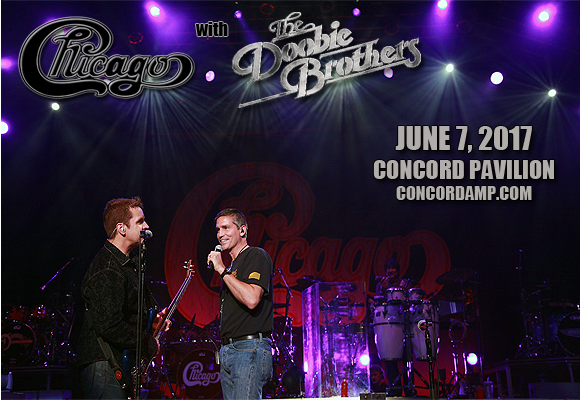 Having sold over 40 million albums worldwide, and with four Grammy Awards under their belt, it's no wonder The Doobie Brothers have been a popular fixture of the music industry for over fifty years! The band began in 1970, with mainstream rock and roll sound that incorporated elements of folk, country and R&B. When lead singer Tom Johnson left in 1975, the band embraced a more soul-influenced sound through their new lead singer, Michael McDonald, who fronted the band until their break-up in 1982. 1987 saw the band get back together, with Johnston back at the helm. Chicago has constantly toured since 1993, with McDonald sitting in with the band on occasion throughout the year, usually as a special guest. They were inducted into the Vocal Group Hall of Fame in 2004, and their most recent release features some of country music's biggest superstars, including Blake Shelton, Zac Brown Band, Brad Paisley and Toby Keith.