It may be a man's world out there, but the entertainment universe is equally lit by the brightest female stars. Music history could attest how women music artists brought so much color, drama, excitement, and a spectrum of emotions through their music that has touched the lives of both mankind and womankind. These artists have risen above and not only had stellar careers but made a difference as well in many aspects of society through their music. Hence, it's time to "Femme It Forward". This is a concert tour by women, for the cause of upholding women, and for the appreciation of music lovers around the world. Femme It Forward Tour features Monica, Brandy, Mya, Keri Hilson, Amerie & Lil Mo at the Concord Pavilion on Saturday 20th July 2019. Book your tickets now! 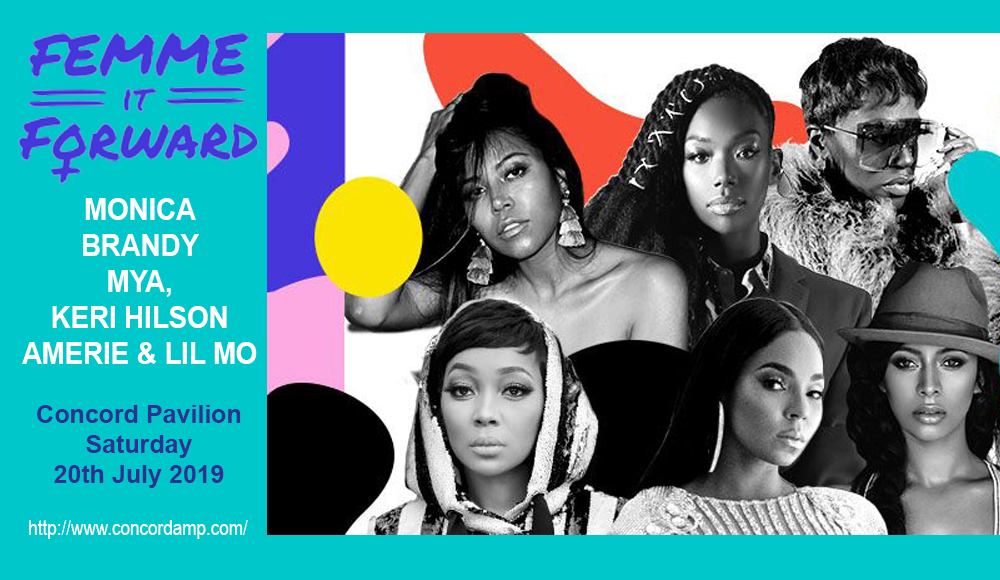 Live Nation Urban, the organizers and event promoter behind the Femme It Forward Tour has designed to “spotlight the entertainment industry’s most creative and accomplished female visionaries, both on the stage and behind the scenes,” according to the announcement.

It is interesting to note that this event includes Brandy and Monica as two of the co-headlining acts. Both artists are known to have a tumultuous past that started in the late 90s, and which seemed to go on like forever, up until news of this concert tour came along… Both have seemed to bury the hatchet, moved on, and posted mutual pleasant and positive messages about this concert on social media. Femme It Forward Tour features Monica, Brandy, Mya, Keri Hilson, Amerie & Lil Mo.

A timely gesture as this concert promotes and upholds positivity, upliftment, inspiration.. Heather Lowery, Live Nation Urban VP Talent & Touring said:
“Since our inception in 2017, Live Nation Urban continues to create opportunities for emerging and established urban artists — both on the stage and behind the scenes. This past year has been an exceptional one for women in music and entertainment, and with the incredible contributions of women, it is fitting that we honor the future of music and its continued steps on the path to inclusion.”

A star-studded entertainment line-up aimed at spreading the good vibes and empowering women. What more could you ask for? Lock-in those dates and start booking those tickets now!