Having set out on the road last year to celebrate the 20th anniversary of their game-changing album Make Yourself, Incubus are back on tour promoting their first new release since 2017's album, 8! The multi-platinum selling alt-rock outfit will be performing from their recent EP, Trust Fall (Side B), which serves as the sequel to 2015’s EP, Trust Fall (Side A)! They be joined for the stint by reggae rockers and former tour buddies 311, who they first hit the road with some 20 years ago! With support from opening act Badflower, the two bands head to Concord Pavilion on Friday 17th July 2020! 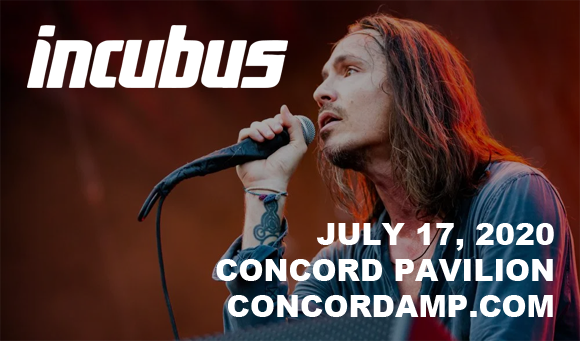 When Incubus began in the early-'90s, they were very much disciples of the funk – clearly taking influence from the Red Hot Chili Peppers' funk-infused metal, but also involving elements of thrash, hip hop, and grunge rock. The group made its debut with the self-produced Fungus Amongus (1995), which led to a record deal with the Epic Records subsidiary Immortal. Two years later, they released their major-label debut album, S.C.I.E.N.C.E. (1997), but it was 1999's Make Yourself that served as their breakthrough. The album launched three singles that found popularity on radio and music television: "Pardon Me", "Stellar", and "Drive", the latter of which peaked at number nine on the Billboard Hot 100 and became the band's signature track. Morning View (2001) and A Crow Left of the Murder… (2004) both reached number two on the Billboard 200, and 2006's Light Grenades was their first album to top the chart. Trust Fall (Side B), a new EP and follow-up from 2015's Trust Fall (Side A), is released this year!