Jazz, soul and R&B fans get excited, because it’s time for the 21st annual 2-day KBLX Stone Soul Concert, with 12 artists performing over 2 days! The second day features an incredible lineup featuring Maze, Frankie Beverly, Keith Sweat, Johnny Gill, Angela Winbush, Zapp and Rob Base on Sunday 27th May 2018 at the Concord Pavilion – you’ve got to be there!! Don’t delay – grab tickets NOW to be sure of your place!! 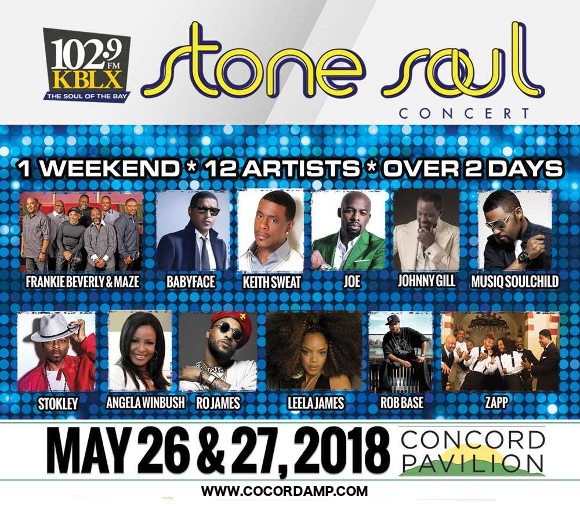 Frankie Beverly and Maze, formed in1976, will be performing their unique brand of soul and quiet storm. Best known for his songs “Twisted,” and “Freak Me,” Keith Sweat was a prominent figure in the new jack swing movement, now performing with his latest record, “Dress To Impress”. With Keith Sweat and Gerald Levert, Johnny Gill was a member of the incredible supergroup LSG, and has also had a successful solo career, including his most recent release, "Game Changer". First part of the duo René & Angela, Angela Winbush has forged ahead solo, with sales of over 10 million albums and singles across the world!! Zapp need no introduction – one of the most influential funk bands to emerge from the 70s, they helped to pioneer funk’s electro sub-genres, in particular the G-funk sound of the West Coast in the early 90s, with much of their work being sampled by 90s artists. Finally, it’s the hip-hop star Rob Base, best known for his hit "It Takes Two" as a duo with DJ E-Z Rock.
What are you waiting for?? Grab your tickets for this incredible event NOW while they last!!