One of the world's best-selling and most raved about music artists are making their way to the Concord Pavilion on Saturday 22nd August 2020. This is poised to be a doubly marvelous show as Maroon 5 will dish out their monster hits that will make you do the moves like Jagger, then guest artist Meghan Trainor will give you head-bobbin' groves from all that bass. Still reeling from their most recent single, "Memories" which is making a killing at the charts and streaming site, Maroon 5 not only has fiercely loyal fans from way back but also a full force of new followers. With this powerhouse team-up, tickets are moving fast. No need to go to a payphone. You could chase and check out those tickets by just clicking on that 'get tickets' link on this site. Hurry, book those tickets now! 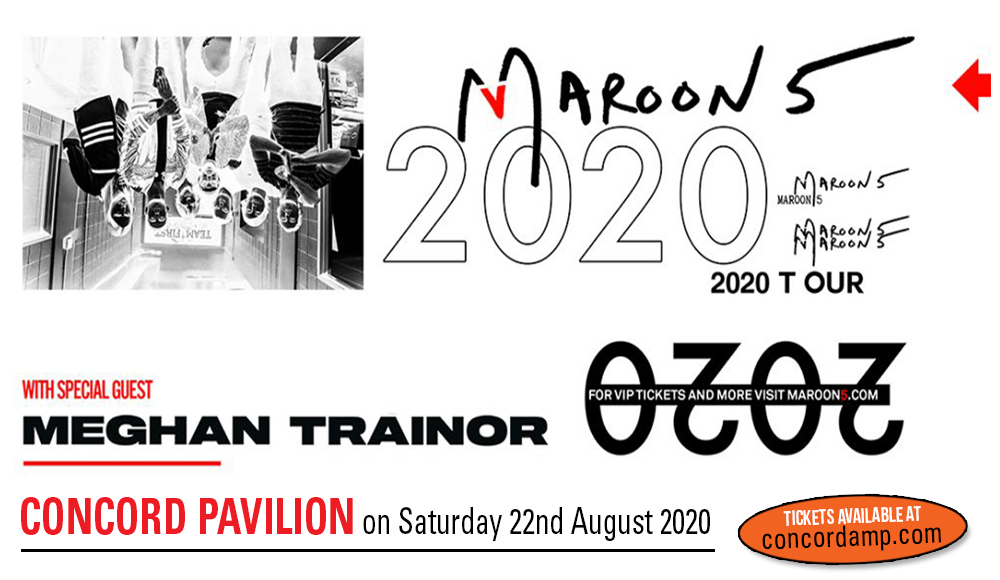 Maroon 5's most recent hit and critically acclaimed single "Memories" prove that Maroon 5 still has a stronghold in that charts that can well translate to a sizeable draw at the concert touring scene. The band is undoubtedly still at the top of their game. Since their debut album "Songs About Jane" in June 2002, which spawned the hits "Harder To Breathe", "This Love", "She Will Be Loved", Maroon 5 continues to wave and soar with flying colors from their unbroken string of hits like "Sunday Morning", "Sugar", "Payphone", "Moves Like Jagger", "Animals", "Makes Me Wonder", "Misery", "Girls Like You", and most recently, "Memories".

A whopping 120+ million records sold! Numbers not only quantify their selling power but also the accolades and recognitions they reaped from their music and artistry. Maroon 5 has to dated, collected three Grammy Awards, three American Music Awards, and three People's Choice Awards, with five Teen Choice Awards, and eight Billboard Music Awards. Maroon 5 also ranked as the 94th best artist of all time based on Top 100 Artists of All Time at Billboard Hot 100 55th Anniversary. They were also listed at number 37th and 11th on Billboard's Hot 100 60th Anniversary Greatest of All Time and on Billboard's "The Top 60 Duos/Groups of All Time" respectively.

This fan love for Maroon 5 proves that they will deliver a great show that's truly not worth missing. Save the date. Book your tickets now!