THE KING OF THE SLOW JAM IS HERE! That's right, it's the one and only – Maxwell and he's coming to Concord Pavilion on Sunday 8th October 2017! The soulful sounds from the classic singer, songwriter, Maxwell is hitting the stages across North America to bring all of his material to the stage. Known for tracks such as; 'Sumthin' Sumthin', 'This Woman's Work', 'Lake By The Ocean' and so so many more! Catch all of your favorite tracks as he performs this Fall! Tickets are on sale right NOW! 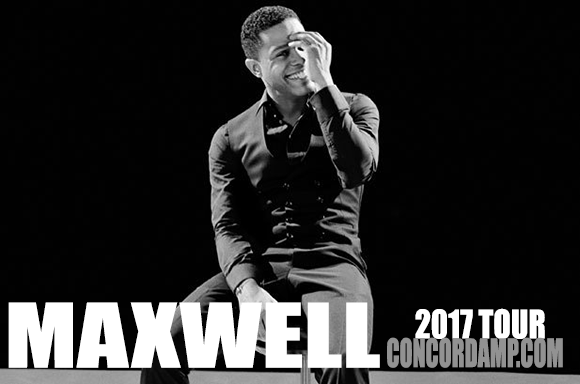 Hailing from NYC, The soul singer, Maxwell is known all around the globe for his influence on the smooth sounds kicking about in the 1990's. Along with artists such as; D'Angelo and Erykah Badu, Maxwell helped to mould the "Neo Soul' genre that a lot of us know and love today. Without it we wouldn't have had the modern day Soul, that would later become the pop R&B of today.

With all of the classic beginnings involved, Maxwell begun to play his Casio keyboard and get inspired by the energy of the city around him, in Brooklyn, "jheri curl soul", was well and truly about – the trademark of early 1980s R&B acts such as Patrice Rushen, S.O.S. Band and Rose Royce.. with all of this incredible talent to gain influence from, he started to branch out and learn all kinds of instruments. Hiphop turned the dynamics of his sound and rapidly changed and grew into a more 70's feel good mixture.

Fast forward over 25 years and Maxwell is still continuing to sell out shows around not just the US but worldwide! Get ready to see him as he takes to a stage at a venue near you – this October, there's only one place to be!