If you love Blink-182, there’s no place to be on Sunday 13th May 2018 but the Concord Pavilion for the massive annual New ALT 105.3 BFD festival, featuring Blink 182 as headliner! Just a few of the other bands confirmed to perform on the day include The Dirty Heads, The War On Drugs, AWOLNATION & Judah and The Lion – it’s going to be EPIC!! So don’t delay – hit the “Buy Tickets button and grab yours while you can!! 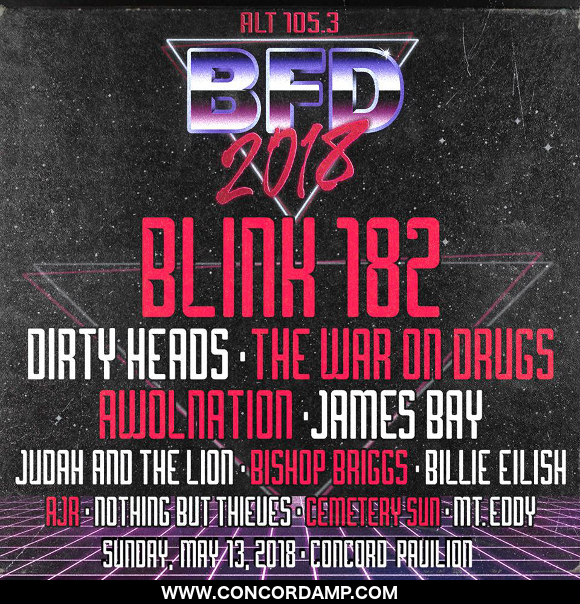 The notorious pop-punk band of the 90s saw a resurgence in popularity recently with their 7th album, “California,” released in 2016, their first to feature new band member Matt Skiba. The album became their second to top the US charts and their first to hit No.1 in the UK – as well as earning the band their very first Grammy nomination! As if all this wasn’t enough, soon after the band started work on their 8th album, which they expect to be “experimental”.

“I think this album took Blink back to its roots and what it’s all about, and I think on the next record, we want to push that boundary again,” said vocalist and bassist Mark Hoppus “We’ll keep the core of Blink 182 but we’ll get a little more experimental. Kind of like what we did on the untitled record, which we’re all really proud of. It still sounded like Blink and had that Blink feeling, but it was different and a little more thought out.”

What are you waiting for?? Grab your tickets to see Blink-182 and more while you still have the chance!!