Expect hit after hit as, after the roaring success of last year's co-headlining tour, Steve Miller Band & Peter Frampton come to Concord Pavilion on Saturday 18th August 2018! These critically acclaimed artists will be performing a full set each of all of their top singles and fan favorites, as well as performing a "jam session" together in between sets that will rock your world! Truly unmissable for any classic rock fan! 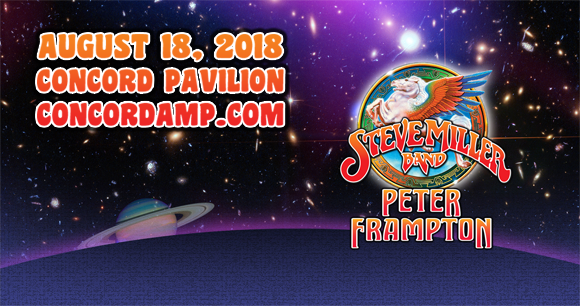 British-American rock musician, singer, songwriter, producer, and guitarist Peter Frampton began his career as a child singer, going on to perform as lead singer and guitarist of The Herd and teaming up with Steve Marriott of Small Faces to form Humble Pie. In 1971, Frampton decided to embark on a solo career, after four studio albums and one live album with Humble Pie. The following year he released his debut, Winds of Change, but it was Frampton's 1976 live release, Frampton Comes Alive!, that served as his mainstream breakthrough, selling 8 million copies and launching three hit singles. Frampton has released twenty solo studio albums to date, and is best known for such hits as "Breaking All the Rules", "Show Me the Way", "Baby, I Love Your Way", "Do You Feel Like We Do", and "I'm in You".