They ruled the world of new wave and synth-pop in the 80s, but Tears For Fears are still reigning over the hearts and minds of their long-time loyal fans, and are streaming into the consciousness of a much younger generation of music fans in the digital and social media age. This 2022, Curt Smith and Roland Orzabal are popping over venues in different parts of the world for their headliner "The Tipping Point World Tour". One of their highly anticipated stops will be at the Concord Pavilion on Wednesday 1st June 2022, featuring alt-grunge band Garbage. Their brand spanking new album release after 17 years of waiting is the title track "The Tipping Point", which will drop in February 2022. The concert will truly be an exciting mix as Roland Orzabal confirms that “The Tipping Point has been a long time in the making and we are looking forward to playing our favorites from the new album as well as our classics from throughout the years.” How cool is that?! The mad frenzy to get tickets is happening right now. Don't be left behind; book your tickets now! 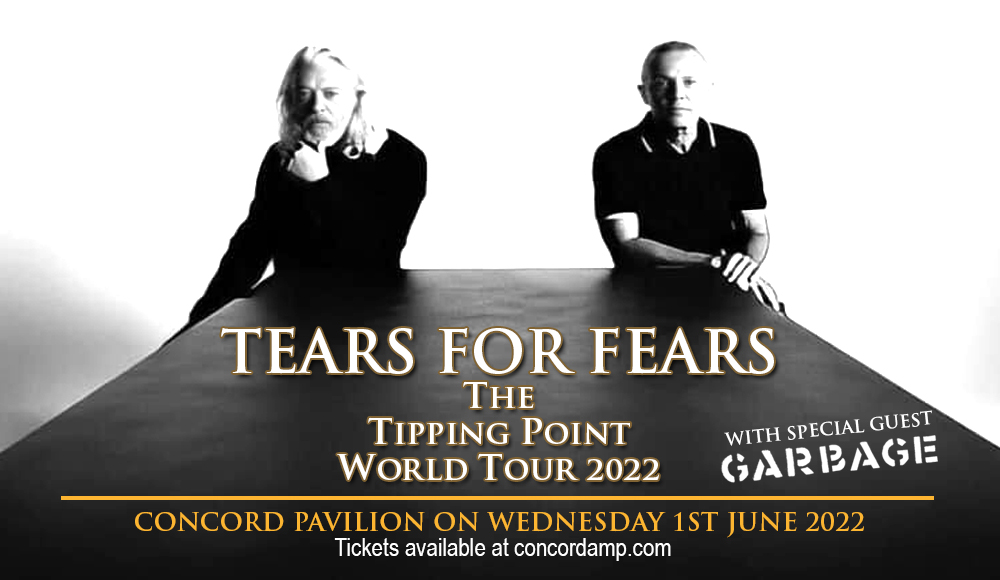 As the world had gone into lockdown in 2020, Tears For Fears' "Mad World" went viral as Curt Smith, one of the lead vocalists of the group, and his daughter Diva Smith, popped in a father-daughter duet version of the band's timeless hit "Mad World". This isn't the first time this happened though. "Mad World" was re-made by Gary Jules from the soundtrack of the movie cult-classic "Donnie Darko", two decades ago. This proves that Tears For Fears music transcends time and generations. “One of our biggest hits is Mad World and when that was redone by Gary Jules and Michael Andrews, exposing its true heart and exposing these beautiful lyrics, you kind of realise that well, OK, that song doesn’t actually belong to an era now…That song has become a universal accepted piece of work, like a standard, like My Way or Happy Birthday", says Orzabal, the band's chief songwriter who penned "Mad World" at the tender age of nineteen. This was also one of the band's early milestones and their first taste of having a hit record, so to speak. Being the third single from their debut album "The Hurting", "Mad World", which reached No. 3 in the UK in November 1982.

From that point, Tears For Fears were poised to rule the world, as they released their sophomore album, "Songs from the Big Chair" (1985), which perched at number one on the US Billboard 200, achieving multi-platinum status in both the UK and the US, and the rest of the world, driven by the colossal hit singles "Shout", "Head Over Heels" and "Everybody Wants to Rule the World". Tears For Fears continued to lord over the airwaves with other massive hits like "Mother's Talk", "Sowing The Seeds of Love", "Woman In Chains"; and after their acrimonious split, Orzabal carried on as Tears For Fears by himself and broke new grounds with his evolved sound in albums like "Elemental" (1993) and "Raoul and the Kings of Spain" (1995). As the duo reconciled in 2000, they released an album of new material, "Everybody Loves a Happy Ending", in 2004.

Picking up from where they left off in 2019, the band has dropped the exciting news that they'll be back on the road as they release their 2022 album "The Tipping Point". Curt Smith says, “We couldn’t be more excited to start playing concerts again. We’ve missed seeing our friends on the road around the world and the energy of performing live.” Now don't you dare miss this gig. Hurry, score those tickets now!