Join the legendary rockers The Black Crowes as they make their way down to Concord Pavilion on Saturday 21st August 2021! This concert season, The Black Crowes will be bringing their unforgettable classic album Shake Your Money Maker to the stage once again to celebrate thirty years since it was first released! It's bound to be a very special night indeed – grab those tickets and join the crowd! 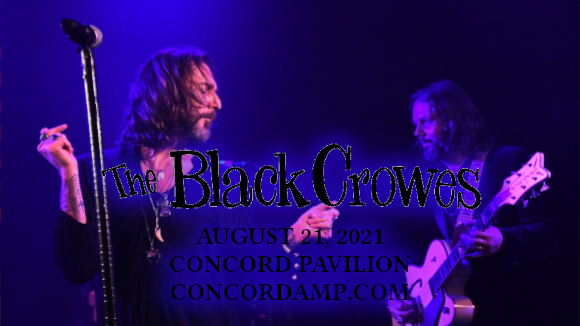 With a long lasting and established career under their belts, The Black Crowes still know how to rock today! Their incredible journey started all the way back during the 1980s and since then they have transformed the music scene as we know it with an unstoppable eight studio records, a collection of four live studio releases and have had countless hit singles on the mainstream charts.

The Black Crowes had a steady beginning but it wasn't until their debut album was released that they gained their major following and greatest success. Shake Your Money Maker was released by the group via Def American Recordings in 1990 and changed their path forever. The record of course included hit songs such as; Hard to Handle," "She Talks to Angels," "Jealous Again," "Twice As Hard," "Sister Luck," and "Seeing Things" and grabbed the spotlight as it sold over five million copies and was accredited multi platinum. As the album remains to be a popular display of their defined soundscape, The Black Crowes aim to bring the record back to life in 2021 in light of reaching thirty whole years since it was first released!

With now over thirty million records sold worldwide in their career, The Black Crowes are known to be one of the greatest bands in Hard Rock and are instantly recognisable for their beloved rock and roll sound and feel to their music. And their name is known all over the globe, including recognition and respect from fellow artists and bands.

Join them as they make their mark this coming Fall season and pay a tribute to their album that changed their lives forever! If you are a fan of The Black Crowes or know someone who is, then be sure to book your tickets for an unforgettable night of good music and long lasting memories!