Are you ready to indulge in some fly times? Wiz Khalifa is blazing a trail across the US on his Decent Exposure Tour, which comes to Concord Pavilion on Sunday 11th August 2019! The tour supports his recently dropped 18th mixtape, Fly Times Vol. 1: The Good Fly Young, and sees Khalifa teaming up with French Montana, Playboi Carti, Moneybagg Yo, Chevy Woods, and DJ Drama for an insane support line-up! 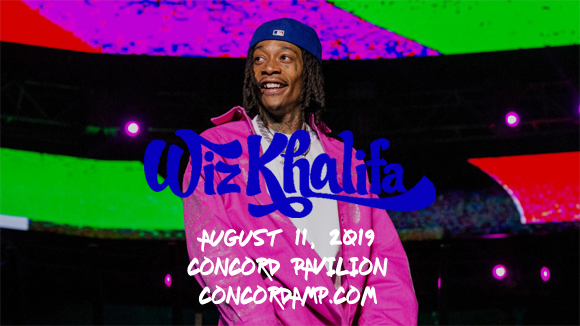 American rapper and actor Wiz Khalifa first came to public attention in 2005 when he released his debut mixtape, Prince of the City: Welcome to Pistolvania, followed by his debut album, Show and Prove, the following year. Show and Prove caught the attention of Warner Bros. Records, who signed Khalifa in 2007, and in 2009 he released his second studio album, Deal or No Deal, which launched the hit single "Say Yeah". In 2011, Khalifa's presence in hip hop was cemented with the number-one single "Black and Yellow" – his Atlantic Records debut from the album Rolling Papers (2011). In 2015, he reached the top spot on the Billboard Hot 100 a second time with the single "See You Again" ft Charlie Puth, which was a tribute for actor Paul Walker from the soundtrack of the film Furious 7, and held the position for 12 non-consecutive weeks. His most recent album, Rolling Papers II (2018), is the sequel to 2011's Rolling Papers and was released in 2018, featuring guest appearances from Gucci Mane, Swae Lee, Ty Dolla Sign, PartyNextDoor, Bone Thugs-n-Harmony and Snoop Dogg, among others.